The Top 10 Best Castles in Luxembourg

Many people ask “How many castles are in Luxembourg?” and it may surprise you to hear that there are over 50 castles in Luxembourg, so if castles are your thing then you have a lot of choice.  Some of them have been restored and others are just ruins.  Here are my favourite 10 castles to visit in Luxembourg from when I was in Luxembourg.

The Best Luxembourg Castles to visit

It can be overwhelming to hear that there are over 50 castles that you can visit, so I am going to list my favourite 10 and most famous castles in Luxembourg to help you decide which castles to add to your list.

If you do not have access to a car and want to see Vianden and Beaufort Castle, then take this guided day trip, where you will visit both castles, see a famous waterfall in Mullerthall and visit Echternach, the oldest town in Luxembourg.  Click here to buy your ticket on this guided tour to Vianden & Beaufort. 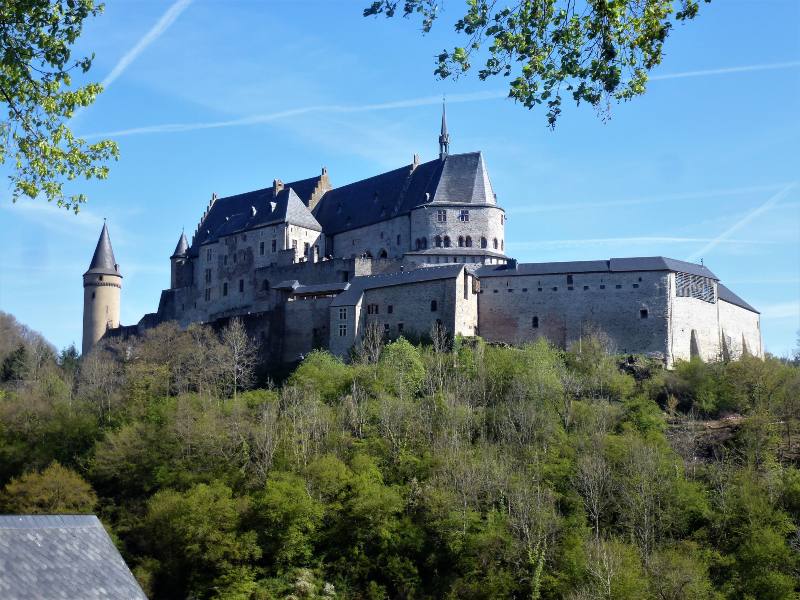 Vianden Castle is for me the most beautiful castle in Luxembourg and visited by thousands of people every year.
It was built from the 11th to 14th century on the foundations of an old roman fort.  In 1820 it was sold and the new owner sold everything off and eventually it became a ruin.  It was transferred into the states ownership in 1977 and since then extensive work has been done to restore it.  There is a set route to take through the rooms of the castle which have been restored to the rooms they believe they were originally.

The castle is open daily from 10am to 6pm.  It costs 10 euros to get in and you can get an audio guide for an extra 2 euro which I thought was well worth it, to hear the history behind the castle and learn more about the rooms you visit.

It is a beautiful castle, situated in a stunning town which the castle dominates.  It is also possible for you to get a ski lift or walk a bit higher up the mountain so you can get a full view of the town and the castle.

Where is Vianden Castle in Luxembourg?  It is located 50km north east of Luxembourg City just a few km from the border with Germany.  Viaden Castle from Luxembourg City is only about 45 minutes by car, though it will take you about an hour and a half by bus.

This was my favourite Luxembourg Castle and one you must visit while you are in Luxembourg. 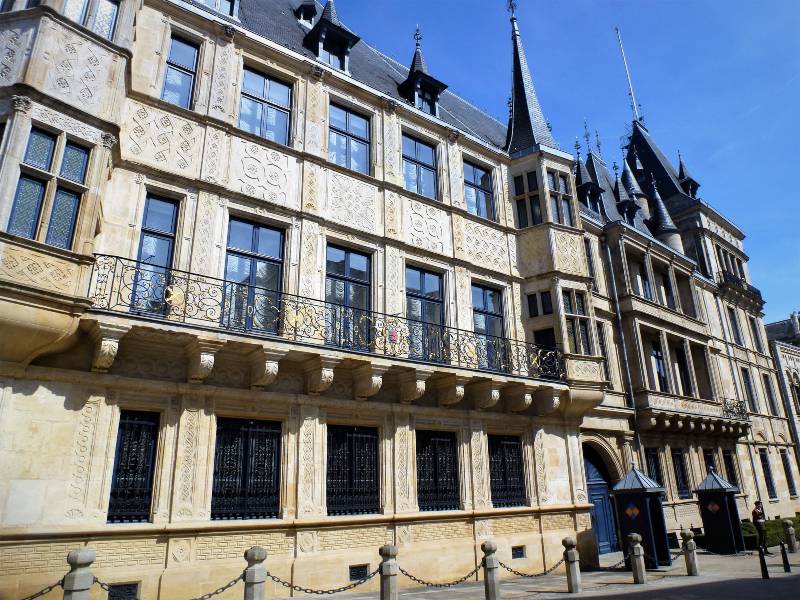 Visit the Grand Ducal palace while seeing Luxembourg in one day

This is the official residence of the Grand Duchy of Luxembourg and is located in the centre of Luxembourg City so you can’t miss it on your trip.  Outside you will normally see a couple of guards, guarding the entrance to palace and once a month you can see the official changing of the guards.

The Luxembourg Royal Palace was originally built in 1574 as the town hall before becoming the Grand Duke’s residence in 1890.  From mid July to beginning of September it is possible to see the inside on a guided tour. 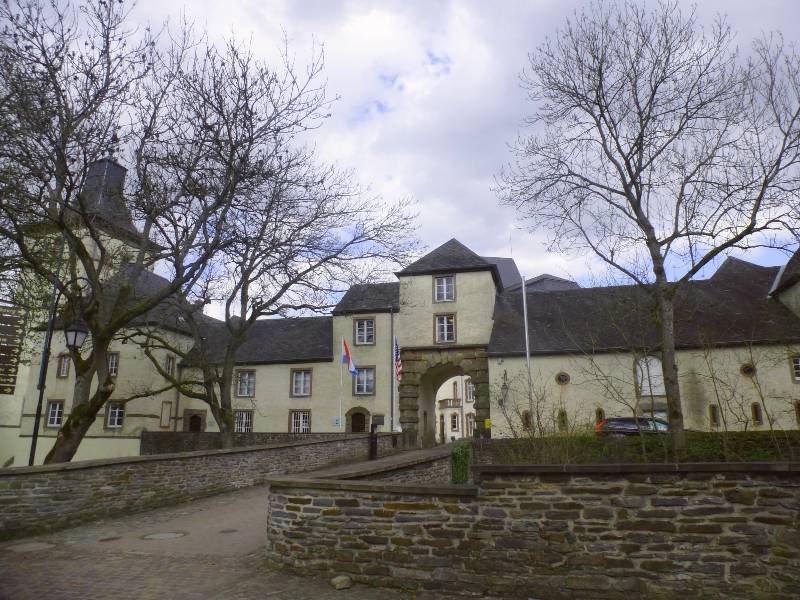 The current castle was built in 1631 on the remains of a previous castle built in the 12th century.  It is located in the town of Wiltz and now holds the National Museum of the Art of Brewing.  There are also festivals held within the grounds in summer.  If you don’t want to visit the Museum which I didn’t, you can still walk around the grounds to see some of the ruins from the previous castle.

It is open all year round from 9am to 5pm, though only july and august is it open from 12-2pm.  The entrance fee is 6.50 euro including an audio guide. 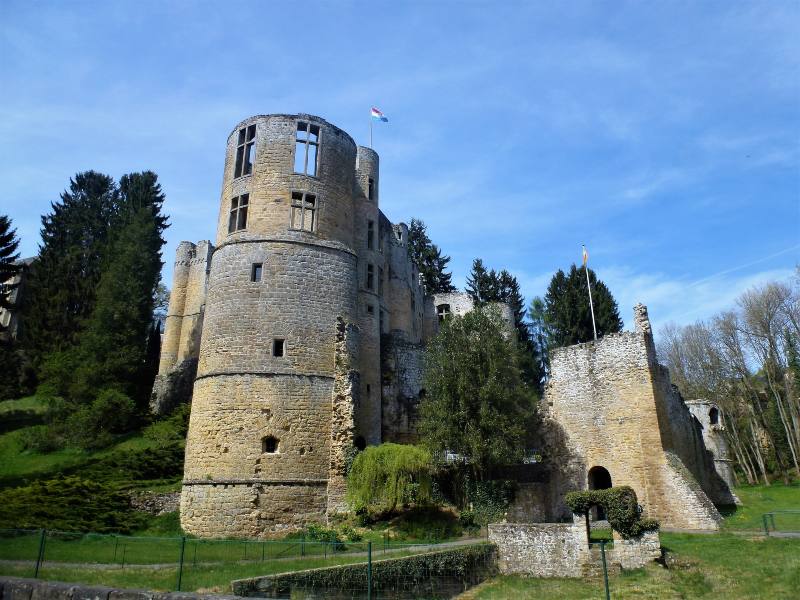 There are 2 Luxembourg castles on this site, the medieval castle and the ruins that you can visit are beautiful.  It was originally built in the 12th century and had a moat surrounding it.  By the end of the 30 year war in the 1600’s the castle was a ruin and the owner sold up.  In 1645 the new castle was built and the old castle was left to decay.  In 1928 work began clearing the rubble at the site and in 1932 after some restoration the castle was opened to the public.

The medieval castle is open from 9am to 6pm from 2 April 2022 to 14 November 2022.  It costs 5 euros to enter and you get a brochure telling you about a few of the different rooms within the ruins.

It’s only small and does not take long to visit, but the location is beautiful and worth a visit if you are in the area.

The renaissance castle was built next to the ruins of the old castle by the new owner in 1645.  In 1981 the ownership transferred to the state but the current owner was allowed to live there until she died in 2012.  It was then opened to the public in 2013.

If you want to visit this castle then you must book in advance for the tour which costs 10 euros and includes entrance to the medieval castle too and is run Thursdays to Sundays at 11am and 4pm. 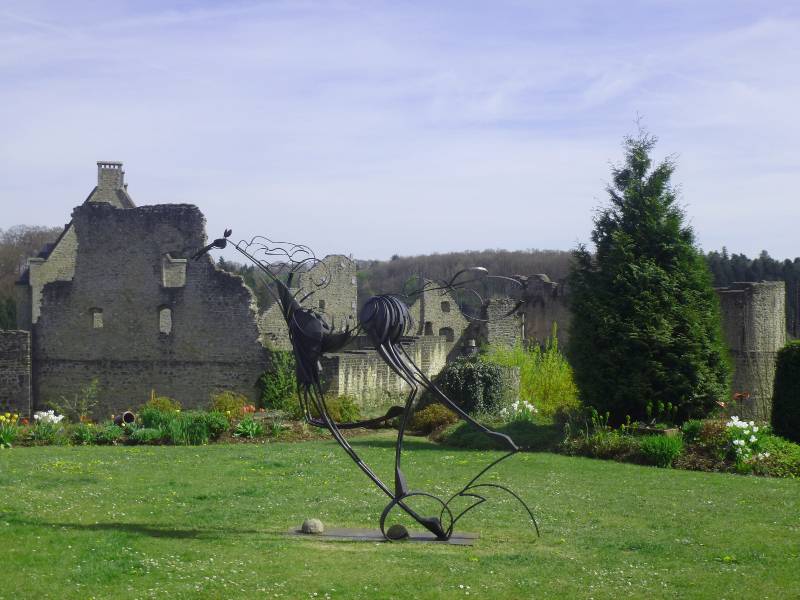 Larochette Castle stands on a hill 150 metres high above the town in the Valley of the White Ernz.  About a 10 minute walk from the town.  The castle was built in 11th century but burnt down in a fire in 1565 and has been a ruin ever since.  The state acquired the castle in 1979 and restoration and archaeological explorations have been done since then.  The House of Homourg has also been restored.

The entrance fee is 5 euro and you walk through the gardens and the area where the bailey once was before reaching the castle.  It is nice to visit, though you do not need much time. 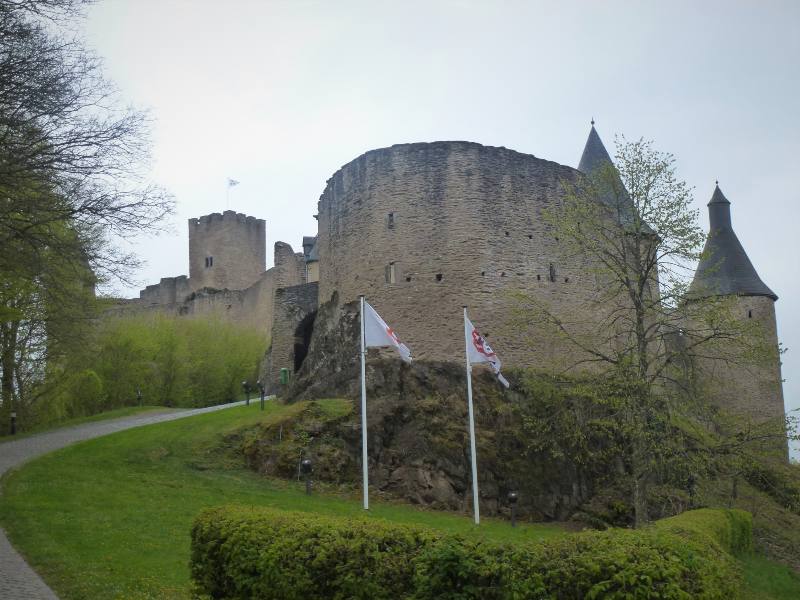 Bourscheid Castle was built around the 11th century but enlarged during the 14th and 15th centuries.  It fell into disrepair in the 18th century and eventually became a ruin. In 1972 the state acquired ownership and reconstruction began.

It stands on a 150 metre high cliff and was strategically important due to how inaccessible it was.

It costs 7 euro to enter and you can also purchase an audio guide for a smartphone or tablet for 2 euros.n.  The views from the castle of the valley before are amazing and it’s well worth a visit.  It is quite a big castle and with the audio guide does take maybe an hour to get around. 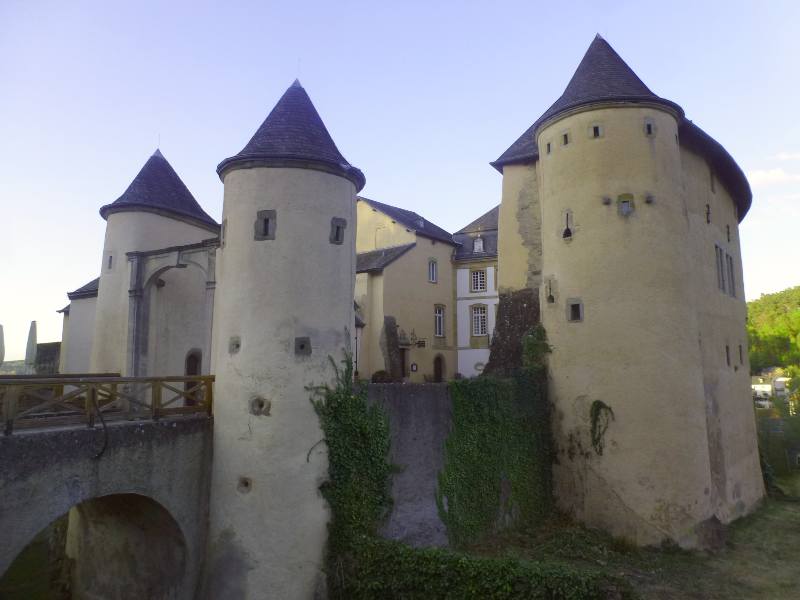 I spent 2 nights in the town of Bourglinster and my hostel was just around the corner from the entrance to the castle so I had to go explore one evening.

It was built in the 11th century and was extended in the 14th and 15th century.  It was party destroyed in the 17th century but was restored.  It was acquired by the state in 1968 and fully restored and opened to the public in 1982.  It now houses a restaurant and 3 banqueting halls.  You aren’t able to tour the inside unless you are visiting the restaurant but you can walk around the grounds and see the outside of it for free. 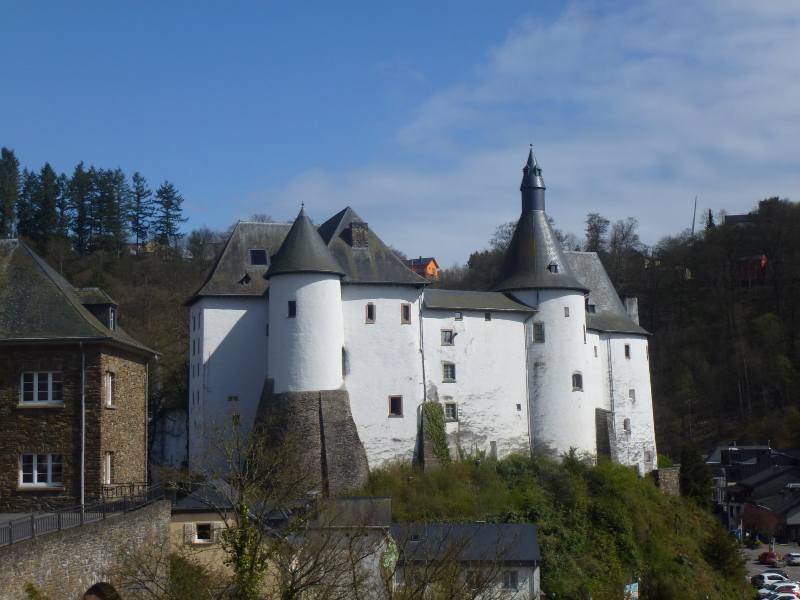 The castle dominates the town and as you are driving through it you can’t miss the castle.  It was built in the 12th century and enlarged in the 15th century. It is the home of 3 museums, “the family of man” photo collection, which is a UNESCO world heritage site.  It is open from 1 March 2022 from Wednesday to Sunday 12pm to 8pm and costs 6 euro.

The Museum of the Ardenees Counteroffensive & Museum of the scale models of Luxembourgs fortified castles, are open daily from 10am to 6pm, each museum costs 3.50 euro though you can buy a combi ticket for both museums for 5 euros.

You can only see the inside if you visit a museum but you are able to explore the courtyard and grounds for free.

It is a nice little town to make a stop and the Parish Church near the castle is beautiful and on top of the hill you can also visit The Benedictine Abbey of St Maurice.  It is only a 15 minute walk to the Abbey but you also have the option of driving up if you have a car. 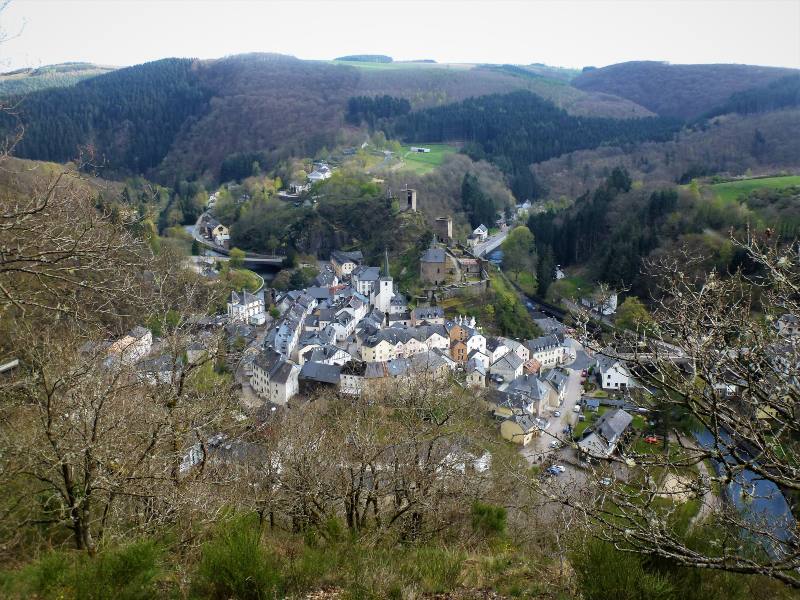 This was one of my favourite places to visit though the ruins are small and on top of a hill in the middle of the town.  It is quite a hike and the 2 ruins are on 2 separate hills if you want to visit both.  I also decided to climb the hill opposite so that I could get this view down into the town.

The castle dates from the 10th century and an extension was added during the 13th century. The castle started to deteriorate in the 16th century and was taken apart in 1685.  The state acquired the castle in 2005 and some restoration work has been done.

If you have a car and are travelling through Luxembourg then this is a place you should have a stop and explore.  The views are amazing and you should hike the hill opposite too. 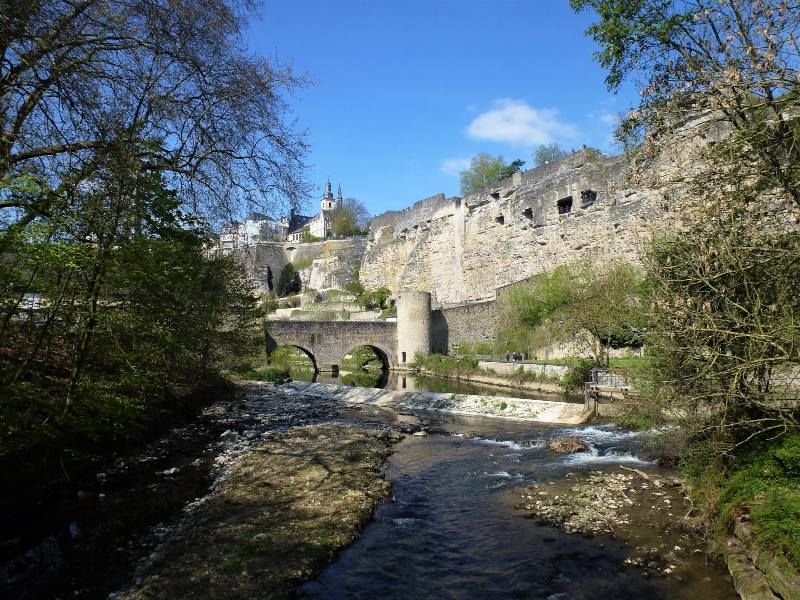 In the city of Luxembourg you can see parts of the original castle in Luxembourg City that was built in 963.  By the 12th century it was extended and was remodelled various times over the years.  The initial casemates were dug by the Spanish in 1644.

The fortifications were dismantled in 1867 as per the requirements of the Treaty of London.  There is very little left of the fortifications now, though you can visit the Bock Casemates and see some of the walls around the old town.  Luxembourg City and it’s fortifications are a UNESCO World Heritage site.

If you haven’t seen enough castles with the list above then take a drive from Mersch to Steinfort and you will be able to see 7 different castles.  Some of these seven castles are privately owned and visitors are not able to access, though some of them can you visit the grounds and explore a little closer.

I hope you enjoyed my guide to a few of the castles in Luxembourg, have you visited any of them or seen any different ones? If haven’t been to Luxembourg yet then I hope you get a chance one day to see this beautiful country.

Where to stay in Luxembourg

If you are planning a trip to Luxembourg city, then check out my Guide to the best Hotels in Luxembourg City.

You might also find these guides on Luxembourg helpful:

Disclaimer: Ilive4travel is a participant in the Amazon Services LLC Associates Program, an affiliate advertising program designed to provide a means for sites to earn advertising fees by advertising and linking to amazon.com and its partners. Amazon and the Amazon logo are trademarks of Amazon.com, Inc. or its affiliates. Thank you for supporting Ilive4travel when you use the links. 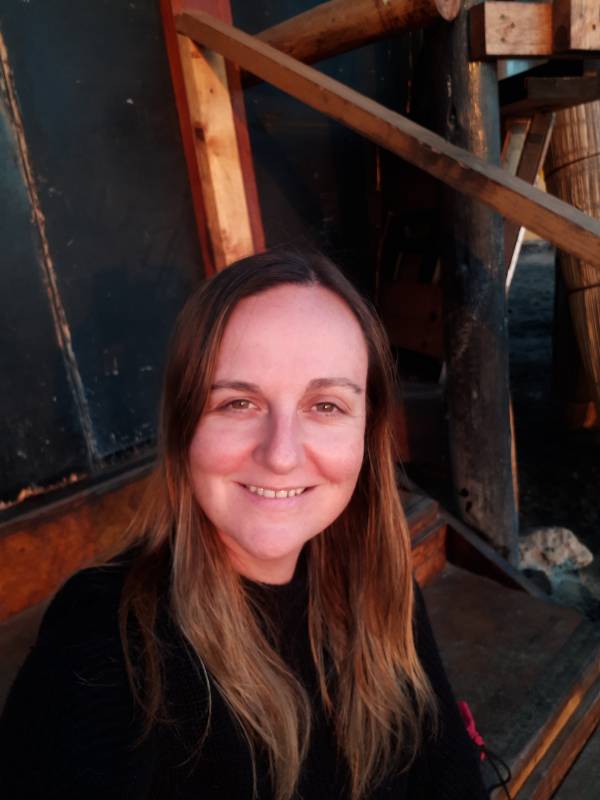 ← prev: Luxembourg in one day, two days or three days A Guide on Where to Stay in Luxembourg → 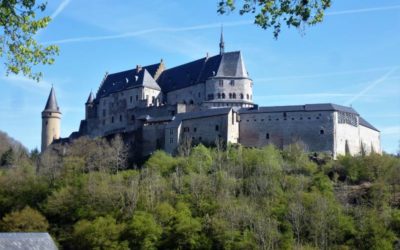 Are you planning a trip to Luxembourg and have a few days and are wanting to see something other than Luxembourg City?... 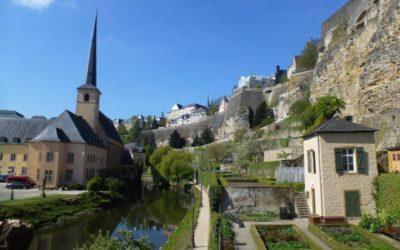 Best things to do in Luxembourg City in One Day

When I booked my trip to Luxembourg I whether there was only things to do in Luxembourg City in one day or whether I... 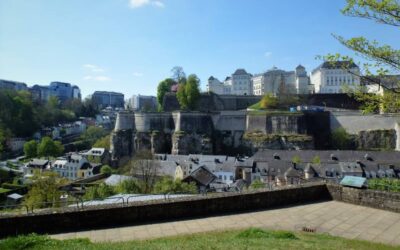 A Guide on Where to Stay in Luxembourg

Luxembourg is the 8th smallest of the European Countries at only 2,586 sq km and is landlocked.  It is surrounded by...